David Perry began Perry Pools and Spas in 1999. Before beginning Perry Pools, David spent 17 years in the hole doing plumbing and structural steelwork as a subcontractor. “I’m one of the few pool builders in Northwest Houston who has been in the hole and understands construction, design, deadlines and communicating with clients after spending all of those years as a subcontractor.”
“People see their pool as more than just an investment,” says David. “It’s a refuge in their backyard and a place to make memories with family and friends. I take the responsibility of making that refuge come to life from start to finish seriously. After all, my name is on each project.”
Because of Perry’s dedication, FOX News Houston chose to feature Perry Pools as a company to trust when Perry came to the rescue of a family whose project was left unfinished by another dishonest pool builder in Northwest Houston.
As a client of Perry Pools, expect quality workmanship and distinctive designs. Whether you have a generous amount of space to work or have limitations, Perry Pools works to help make the most of your area.
Perry has stayed in the Cypress area because he enjoys helping friends and neighbors achieve their dreams. David is always eager to help make his Northwest Houston community a better place for families. “Over the last three decades, I’ve seen a lot of pool companies come and go,” says David. ”You might be able to save money and cut corners with another pool company, but if that company isn’t around to repair the cracks that result from shortcuts they took during construction, then you haven’t saved much at all.”
Perry Pools has earned numerous awards: 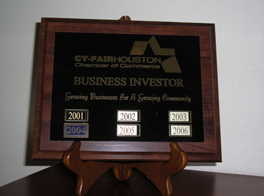 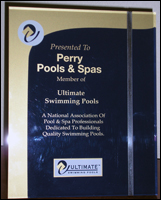 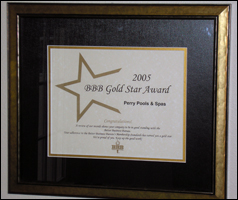 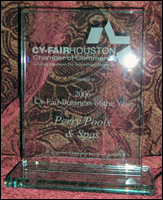 Cy-Fair Business of the Year